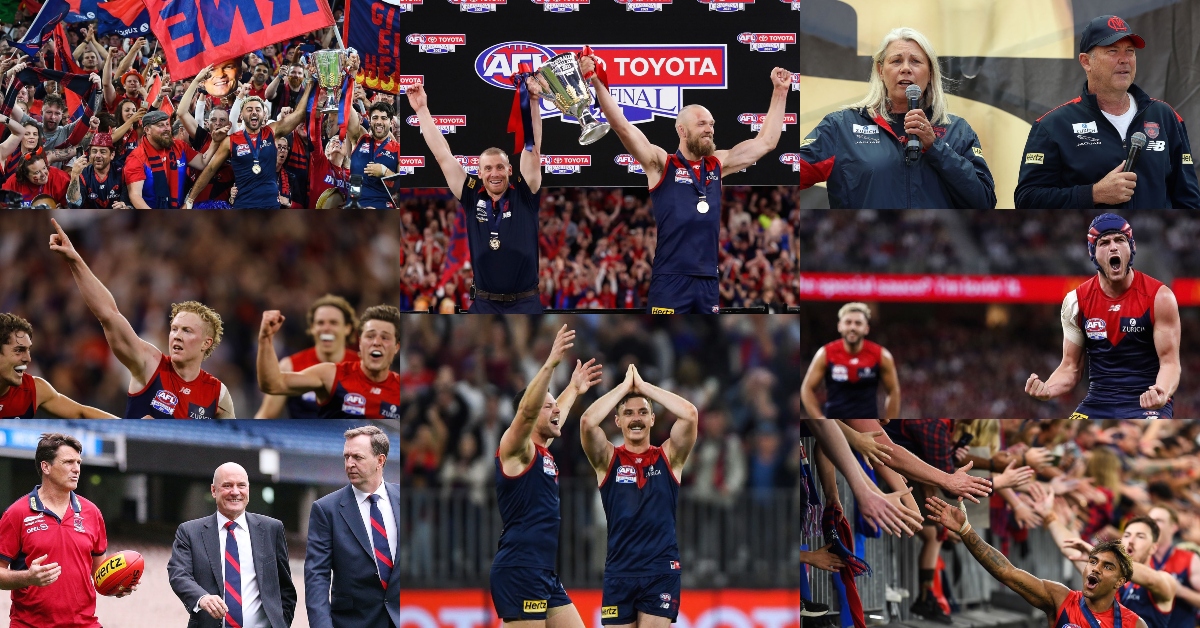 Revel Demons But ‘Big Club’ Work To Be Done

I have a gag with one of my best friends.

At the end of every phone call we sign off with, ‘And, ah… go Dees’. It’s a proper piss take, which started back in 2009 when we lived together.

My whole mantra, despite being a disgruntled Melbourne supporter, was to have a bit of a laugh at our own expense. The situation was so dire for the club during the dark years that if I took it too seriously it could have sent me into a mental tailspin.

Wishing my mate a happy birthday on a recent call was funny this time around. ‘But hang on, the ‘Go Dees’ doesn’t really work anymore, does it?!’, he asked, as we both had a giggle.

Well, no the premise doesn’t exactly work anymore. Melbourne’s rapid transformation in 2021 means they are suddenly the envy of the competition. But are they? More on that later. Firstly, let’s examine where Melbourne finds itself now.

They have an array of stars in Norm Smith medalist Christian Petracca, his partner in crime Clayton Oliver, inspirational skipper Max Gawn, the elite defensive duo of Steven May and Jake Lever, Bayley Fritsch has elevated his stocks considerably, there’s the ‘Wingers Club’ of Angus Brayshaw and Ed Langdon and the silky smooth operator at half-back Christian Salem. The list goes on. It’s an embarrassment of riches.

Melbourne’s age and games profile leading into the finals campaign was the second most inexperienced, only behind Essendon. Tom McDonald, 29, is the most capped Demons player with 193 matches to his name and most of the side’s genuine A-Graders are still yet to hit their peak. It’s a scary proposition for opposition clubs trying to hunt down the Dees.

But despite the hype and fair assessments around Melbourne being primed for more success, there are no guarantees. 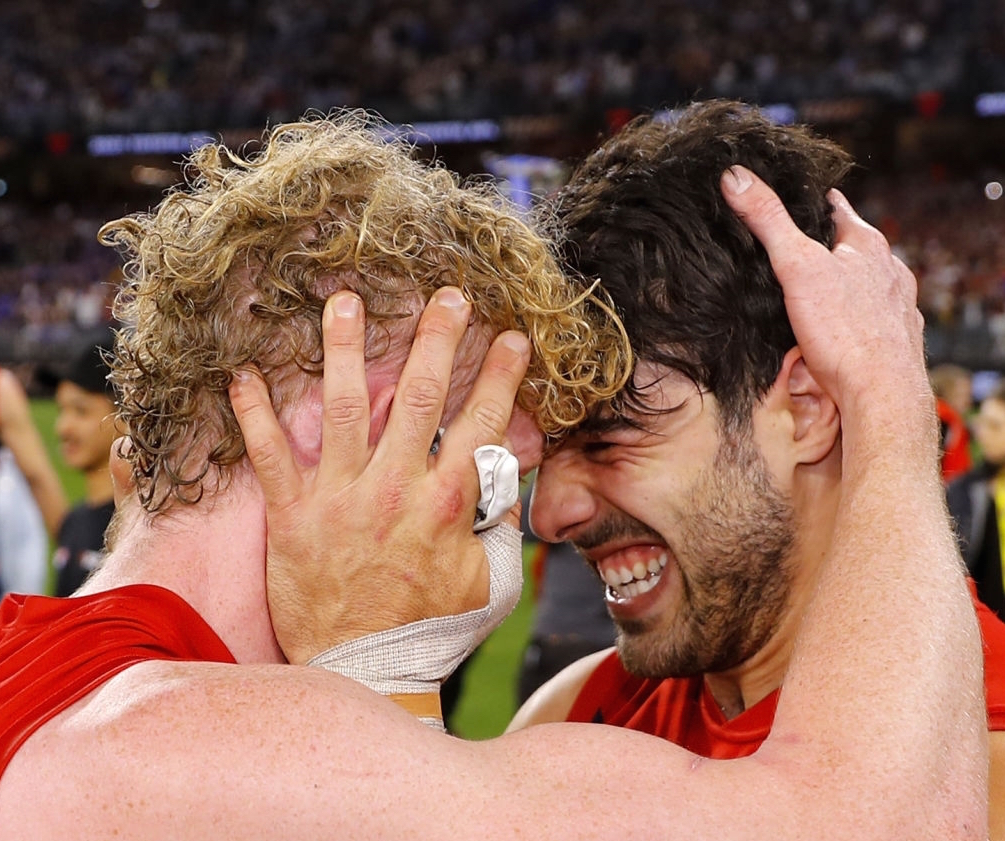 Essendon from 1999 to 2001 is another obvious team that never reached its full potential, claiming a solitary flag when a three-peat wouldn’t have begrudged that powerful outfit and arguably one of the best ever assembled.

Premiers of 2010, Collingwood only lost two games in the home and away season the year after, yet stumbled at the final hurdle against Geelong in 2011.

And the probably the most damning example is St Kilda. They had a golden opportunity in 2004, kicked 9.14 to 12.8 in the 2009 Grand Final, a season in which they went 20-2 and were then humbled by the Magpies in 2010 after a thrilling draw. A team littered with class and supreme talent on every line, who could have won multiple premierships, only to be left empty-handed. Brutal.

The flippant nature of media outlets and fans alike, ‘oh they’ll go on a tear and win plenty more now’, is lazy rhetoric. These aforementioned examples reiterate this very point.

AFL is unforgiving and ruthless. Nothing is guaranteed.

While talk of dynasties might be premature, a major and real opportunity awaits Melbourne; how they harness their premiership momentum for the betterment of the wider club.

An exciting new chapter has begun. For President Kate Roffey, CEO Gary Pert and the Board they will be doing everything they can to ensure it’s a long-winded and captivating novel and not an abruptly lived tale.

Every supporter aspires to be a part of a powerhouse club. On-field success goes hand-in-hand with this label and continuing to compete at the top end is a pre-requisite in Melbourne’s pursuit to reclaim glory decades and rebirth themselves as a mighty club once more.

And the head honchos of the Demons can bolster that quest by executing upon key pillars outlined in the club’s four-year Strategic Plan. 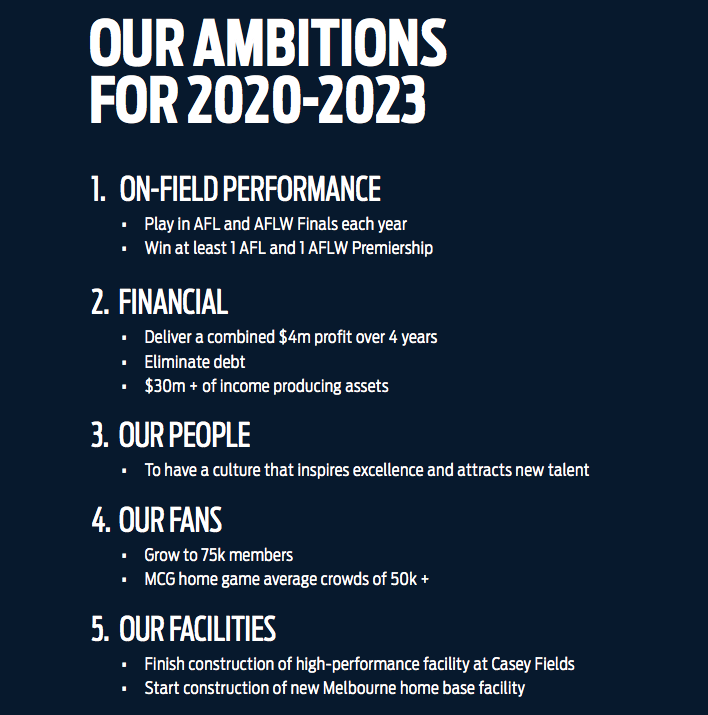 AFL premiership. Tick. AFLW, next on the agenda.

In terms of ‘Financial’, while the club lost significant revenues with the rescheduling of Queen’s Birthday to the SCG and missing out on Northern Territory matches, Melbourne’s premiership was able to net an extraordinary surge in merchandise sales of $2.7m throughout the 2021 finals series – according to Pert was the equivalent of three years worth of sales – and made up for these match-lost revenues. And no doubt, the club merch will continue to sell in the off-season.

Factor in the sale of the Bentleigh Club for $23.7m and it puts the club in unprecedented territory.

“Financially, we are in the strongest position we have ever been in our long history as a club and this is a crucial step in solidifying this financial security,” Kate Roffey said after the Bentleigh Club sale.

“The club is debt free and now in a position to future proof itself.”

The ‘Our People’ is arguably the most pleasing aspect of the MFC. Inspiring excellence is one thing, but to see the club build an organisation of such strong inclusiveness is so comforting.

The connection between the women’s and men’s sides is genuine and Goodwin and Gawn’s initiative to bring the whole group together from rookies, reserves and fringe players was self evident throughout the AFL season, especially in the post-match Grand Final celebrations.

Furthermore, seeing past champions of the club running up hills in pre-season with the current crop and engaging with the players over video during a thrilling September was another example of the refreshing changes.

Melbourne has implemented a Whole of Club approach and as a supporter it’s very heartening to see.

However, outside of sustained on-field success, the pillars that the members and supporters really want to see delivered lie in ‘Our Fans’ and ‘Our Facilities’. These are the big ticket items that Roffey and Pert will be laser focused on in the next instalment of growth.

Membership tallies are like a badge of honour among supporter bases. While traditional clubs like Essendon and Carlton have endured lean years in the past couple of decades they have always been able to talk up their respective armies. This fandom is borne out in Carlton’s record membership tally in 2021 with 81,302 people committing to the club, while Essendon have remained steady at similar numbers for the past few years.

Fans crave success, but they also crave being a part of a big crowd. The 75,000 target by the 2023 season may have seemed unrealistic to many when the plan was formulated, but after a drought-breaking flag the fandom is now there to be capitalised upon.

Prime-time Channel 7 scheduling is expected to benefit the reigning premiers and this increased exposure will naturally see an uplift in brand value, resembling the Demons as a club that more people will want to be associated with.

It makes for encouraging reading when you look at spikes in membership after flag success. 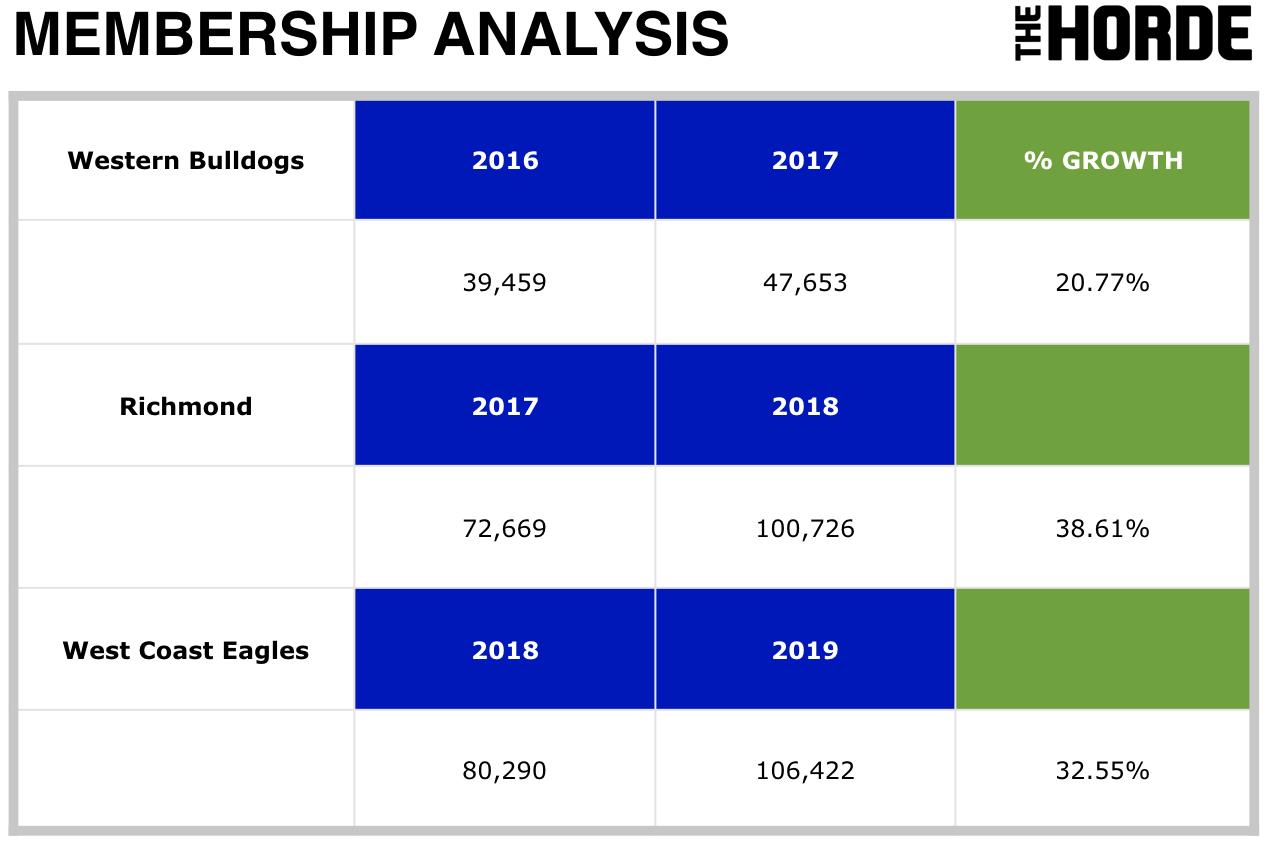 Melbourne achieved a club record membership of 53,188 this year. In 2022 at a realistic increase of 25% for the Demons that would see them hit 66k members, while 30% has them on the edge of 70k and anything above 35% or more would see them seriously close to hitting their desired target of 75,000 members. It’s safe to say, even at the lower end of expected growth, they are well on their way to achieving this milestone in the next couple of years.

Finally, in order for Melbourne to accomplish the ultimate turnaround from a club once labelled as ‘mired in mediocrity’, not so long ago, to an organisation that opposition fans feel jealous of, it needs a permanent home.

Casey Fields might be a fantastic facility, but it’s locality does not meet Melbourne’s roots and needs. The red and blue faithful want to see the Demons housed at a nice, shiny new headquarters in the Melbourne Park precinct.

Make no mistake, the Dees are acting like a big club already. This is evident in how they’ve handled contract negotiations to retain their stars, selling off assets, restructuring the football department and improving their culture, but perception is reality.

You only need to take a stroll down Punt Road to see Richmond’s impressive setup, then walk a further 500 metres to the Lexus Centre and admire Collingwood’s facilities. Buildings branded with giant club logos and their respective team colours, while it may be simple it screams big club. Having that physical identity and status is absolutely imperative moving forward.

It’s typical for an opposition supporter to have a dig, ‘you train on a public park!’ The return of fire now, after a flag, has a bit of wit to it, ‘yeah, and despite it’s limitations, we still won the premiership! Ha!’ But in all seriousness it’s not ideal and the club knows that, with Pert constantly stating it publicly.

The recent upgrade announced by the Victorian Government to re-size Gosh’s Paddock and get it closer to MCG dimensions is welcome relief for coaches to replicate match play simulations. Although the big news Melbourne supporters are all eagerly awaiting is an update on the home base, due to drop over the coming months.

“In regards to the home base, which is the second part of the work that we’ve been doing, the budget has been approved to finalise the design work and the planning work. Those designs will be completed around Christmas this year,” Pert said in a press release on June 18 this year.

Some 1400 words later and I wanted to pick up and finish off on that phrase ‘envy of the competition’. A quick glance at playing talent and you can understand why this would the case. But as a broader football club, there’s still work to be done to reach the powerhouse status.

It’s scarcely believable to be even writing about the potential of Melbourne becoming a big dog of the competition – but let’s not lose sight of the 13 flags and how that history alone can be harnessed in the coming years, too.

While the players have fulfilled their much spoken about promise, with hopefully more premierships to come and edging closer to Collingwood (15), Carlton and Essendon (16 apiece), the club’s administrators will be inspired to do the same off-field.

Peter Jackson, Paul Roos and Glenn Bartlett laid the foundations. Pert, Goodwin and Roffey have initiated the next phase, but the head coach said it himself in his premiership press conference: “this is the start for our footy club.”

For now, supporters will keep watching re-runs of the Grand Final replay all summer long, as we dare to dream with genuine optimism in the rebirth of a successful and sustained era for the Melbourne Football Club. 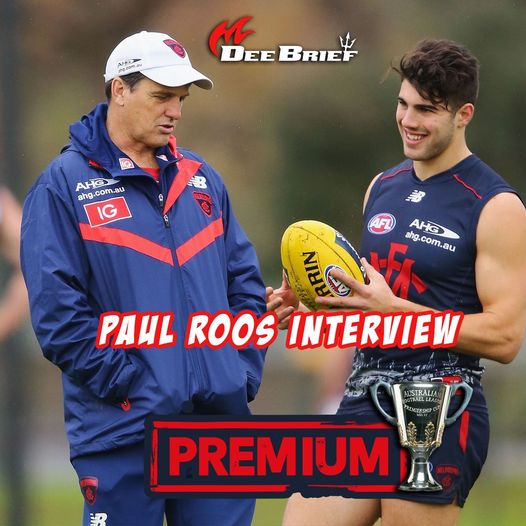