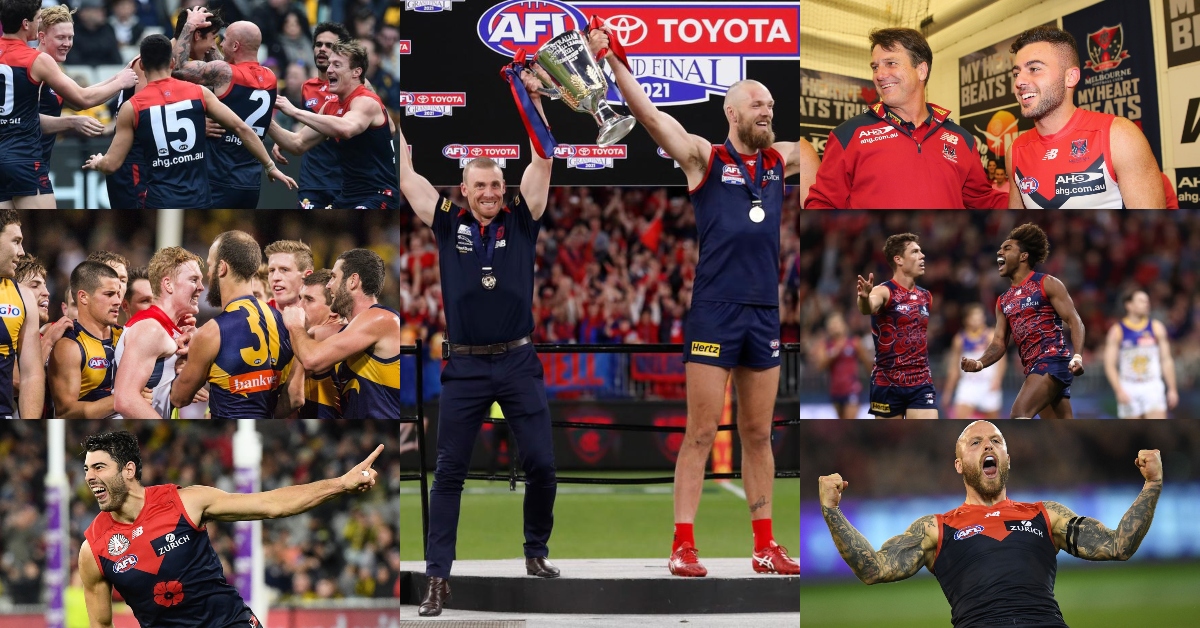 Some Melbourne fans are still in disbelief. The Norm Smith curse has been laid to rest after 57 long years.

The premiers of 2021 have a December party to enjoy in Melbourne with the faithful and hopes and dreams of winning more silverware in the immediate future.

It was an arduous journey, until Paul Roos’ services were secured and a succession plan was created. Slowly, but surely the club began to turn it around, with Simon Goodwin employed to help elevate the club into finals and start competing for the Holy Grail once again.

We take a look back at the club’s most significant victories during the Roos and Goodwin eras that helped shape the club’s journey to a drought-breaking 13th flag.

Who could ever forget this frantic finish? Melbourne were down by almost three goals late in the game, but led by inspirational co-captain Jack Viney they dug deep. Tom McDonald’s acrobatic snap from the goal square, while being tackled is iconic and earned the Dees a dramatic three-point triumph. He booted five goals to announce himself as a forward, as the Dees claimed their first win in Perth since 2004. It was a gritty road win and one of Goodwin’s best early moments as coach in his first year. 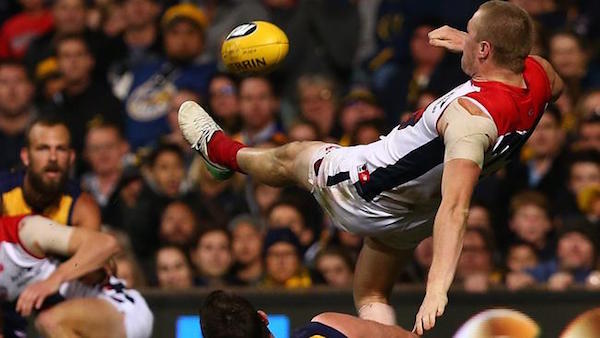 Essendon were cruising toward victory, opening up a 33-point lead early in the third term. Melbourne rallied to cut the margin back to just two goals at three-quarter time. An upset was brewing. With less than a minute on the clock the Bombers held a slender five point margin. Deep in the Dees’ defence they constructed a superb play, which resulted in Christian Salem taking a mark 30 metres out from goal. He kicked truly and Melbourne clung on for a famous one-point victory. 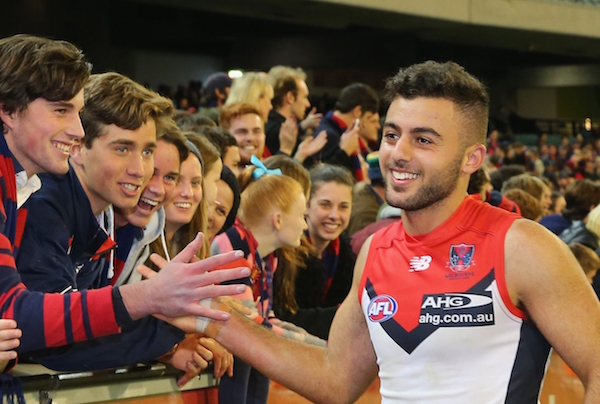 After starting the season 5-0, the red and blue faithful were daring to dream. On the big stage of Anzac Eve against reigning premiers Richmond it was an opportunity for Goodwin’s men to prove themselves. The Tigers blew Melbourne away early and it looked ominous. In Nathan Jones’ 300th, though, they found another gear after quarter time, as the Dees absorbed Richmond’s pressure and countered with some devastating footy to run out 38-point winners. It marked the club’s best start to a season since 1965 and ignited genuine belief in the supporters about their premiership credentials. 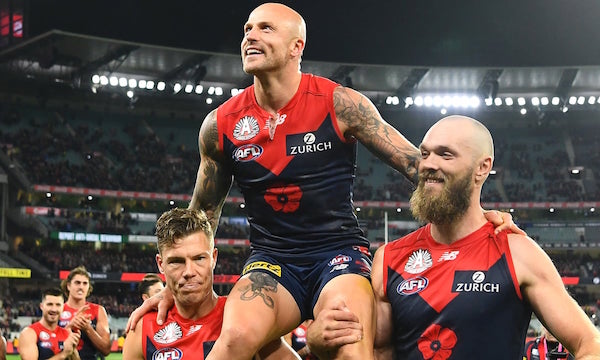 It was Paul Roos’ biggest scalp to date in his second year as coach. A tall, gangly and relative unknown to the Cats supporters called Max Gawn, obliterated the opposition ruck stocks to claim three Brownlow votes and help Melbourne record an incredible victory at a venue, which haunted the Dees. The Demons gatecrashed Corey Enright’s 300th game party and earned a first win in Geelong since 2006 and was a statement of intent about Roos’ emerging group. 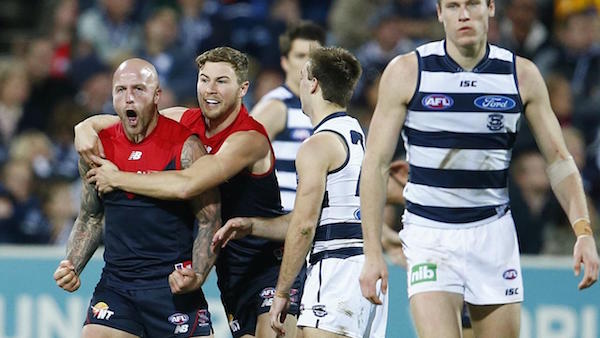 Adelaide were top of the ladder, while Melbourne’s 3-4 start to the year had them on the edge of the eight. In hostile territory and nearly five goals behind midway through the second quarter it looked like a procession for the home side. Tom McDonald, Jack Viney and Clayton Oliver inspired the team, as they started to assert themselves. An eight goal to one quarter in the third blew the game apart, with Melbourne stunning the Adelaide fans on their way to a comfortable 41-point win. Pundits labelled it the club’s most significant win in many, many years. 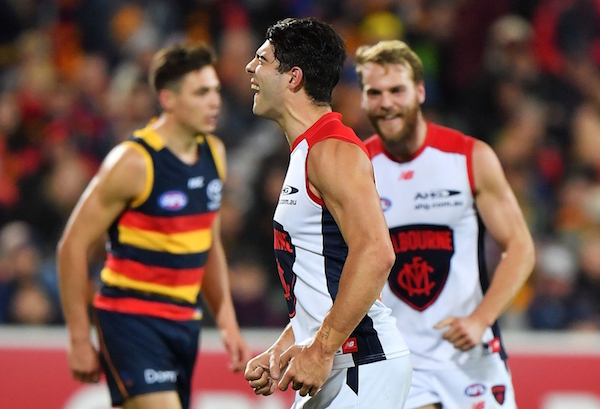 For Melbourne supporters the ending to 2017, bundled out of finals by Collingwood in the final round hurt deeply. It was still lingering the following year and failing to beat Sydney at the MCG the week before they travelled to Perth for a showdown with West Coast put their finals position in jeopardy. After a see-sawing, intense and nervy battle, Melbourne broke the shackles late and when Dean Kent converted from outside 50, Demons could rejoice. Finals footy was secured for the first time in 12 long years. Tears were justified. 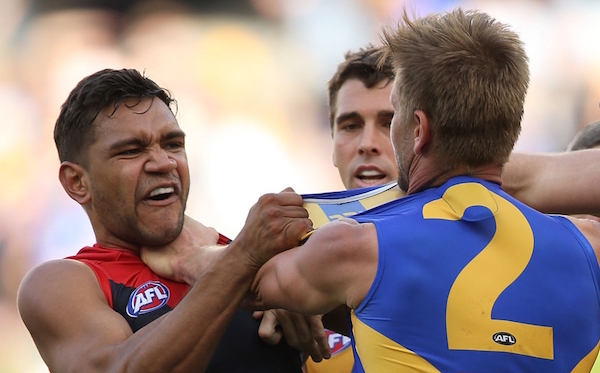 After dispatching Geelong in Week 1 it was time for Melbourne to start a new chapter against another team who had habitually tormented them. In a thrilling encounter in front of a raucous MCG crowd it was Melbourne who had the ascendancy for most of the match. Enjoying a comfortable lead at the three-quarter time break, some Dees fans were casting their mind forward to a preliminary final with West Coast. But the Hawks were always a thorn in the Dees’ side, rallying with three quick-fire goals to start the last term and cut it back to just two goals. Melbourne held their nerve, fought it out and eventually broke away to claim a monumental win. 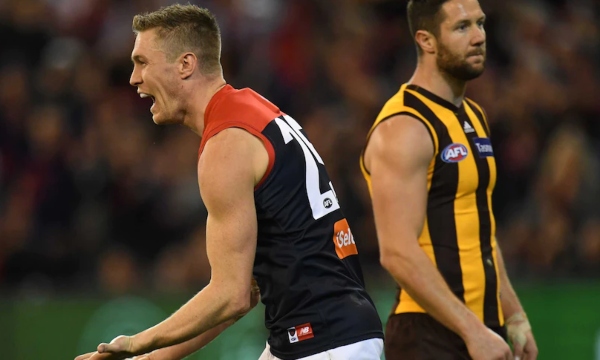 Brisbane came into this encounter as the form team of the competition. After a morale boosting win over the Bulldogs the week prior, Goodwin’s men found themselves in a vulnerable position at half-time down by 20 points. They exploded into life after the break, with the mercurial Kysaiah Pickett wreaking havoc and Christian Petracca dominating in the middle. In a tense final term, Melbourne put together a scintillating chain of play, starting with Jake Lever in defensive 50 and ending with Tom McDonald, who kicked the pivotal and match-sealing goal for the Demons. It was a night where Melbourne proved once again they had the right ingredients to compete for the flag. 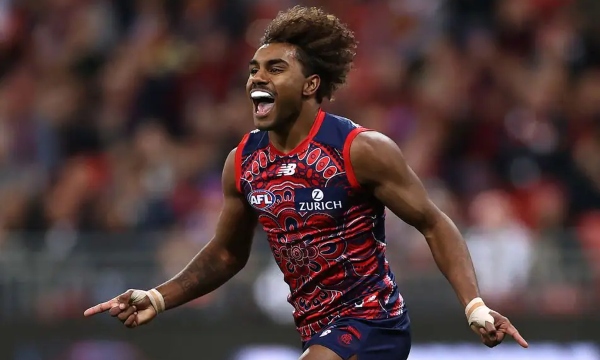 What a buildup. What a night. A sea of red and blue descended on the Melbourne Cricket Ground for the Dees’ first finals clash in 12 years. After a barnstorming start, Melbourne kicked five goals to zip in the first quarter. An arm-wrestled ensued after that point, with the Cats never genuinely threatening. Young key forward Sam Weideman enjoyed a breakout game, finishing with three goals and Mitch Hannan sealed the deal with a long running goal that Demons supporters had on loop in the days after. It was an evening where Melbourne took a big step forward as a club, earning back plenty of respect in the process. 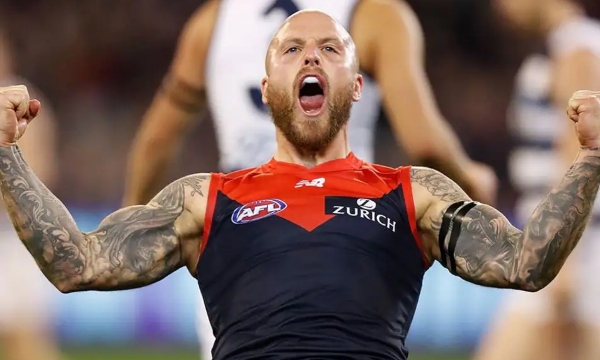 Melbourne hadn’t beaten Hawthorn in their previous 13 encounters. It had become ‘men vs boys’ over the journey, as the Hawks strolled to premierships and the Demons were languishing around the bottom reaches of the ladder. But on a Saturday afternoon in August with Hawthorn eyeing off top spot, Melbourne had other ideas. The Dees supporters were wild, as they roared their team on in a frenetic final term, which saw Roos’ men finally break-through in a victory that halted a run of nine-straight wins for the reigning three-peaters. It was a watershed moment for the club, one which instilled the belief they could match it with anyone and has often been referred to as a turning point for the club. 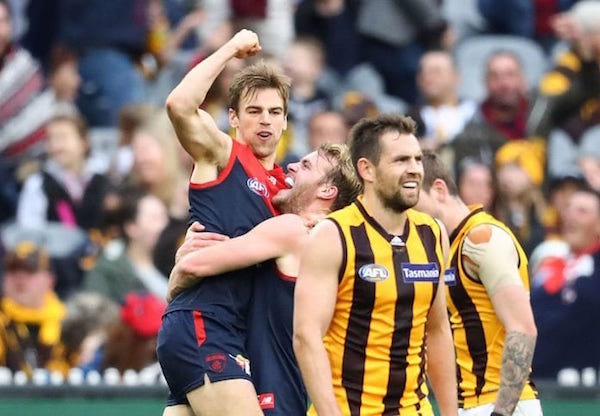 After dispatching of Brisbane comfortably in the qualifying final it was Geelong’s old veterans who stood in the way of Melbourne’s destiny. In an exhilarating display of some of the most powerful footy witnessed in years, Max Gawn went full turbo mode. The skipper kicked five goals and put together one of the great finals performances, highlighted by a third term for the ages. It was a procession. Melbourne buried old wounds that Geelong had inflicted in the past decade and booked their place in the Grand Final with serious momentum behind them. One of the most complete and dominant performances in the Dees’ history. 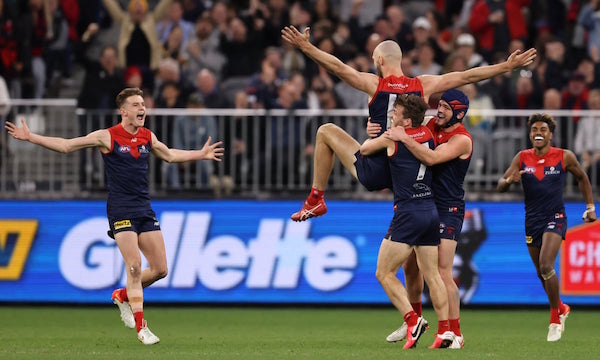 How many teams come back from a four or five goal deficit against Geelong in Geelong? Not many, if any is the answer. Let’s try 44 points and it’s late in the third term. That was the deficit and challenge facing the Demons, who were battling it out for a shot at the minor premiership. It looked forlorn, but they inched close enough at three-quarter time to have a red-hot crack in the final stanza. My word, did they have a crack. Kozzy Pickett got the side going, then Charlie Spargo chimed in and the team got to work. Determined skipper Gawn and his midfield maestros, Petracca, Oliver, Viney smashed Geelong and suddenly the deficit was less than a goal. In a bizarre final play, Lever was awarded a 50 metre penalty. He spotted up Gawn in a sea of Cats players; it was precise. The siren sounded. Gawn kicked truly, Melbourne snatched top spot at the death, while Tom Hawkins and Co. started crying and you just knew then and there, this team could go all the way. Belief was sky high. 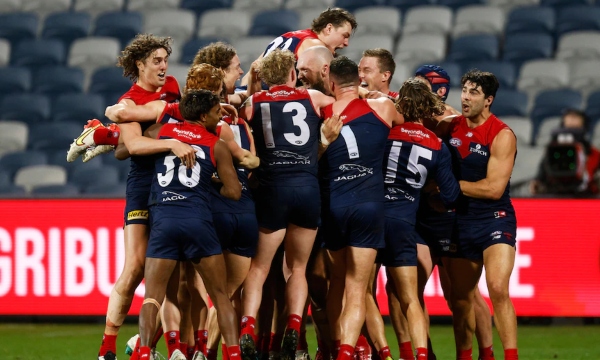 Two Grand Final appearances since 1964 had resulted in shellackings for the Demons. In 1988 to the tune of 96 points at the hands of Hawthorn and in 2000 a 10-goal drubbing by Essendon. Brutal. Melbourne entered 2021’s last day in September as favourites. They were different gravy. But as the story goes, when Marcus Bontempelli kicked truly in the third to get them out to a 19-point lead, the dreaded vibes of the curse began to take over. ‘Surely, not again? When will this pain and suffering end?’ Those were probably the words, or thereabouts, on the minds of Melbourne’s army of devoted supporters. Then, out of no where a switch was flicked. In what is now known as the most imperious and utterly dominant 1.5 quarters of Aussie Rules, the Dees piled on 16.4 (100) to the Bulldogs’ measly 1.1 (7) and ran out 74-point victors. Oliver’s salute, Trac’s dribbling goal, Dogga’s ruck wizardry, Sparrow off one foot, Gus’ diving mark, Fritta out the back, Viney’s mongrel bastard – the list goes on. It was magic. It is now folklore. And for Melbourne it gifted their supporters the greatest gift of all, a premiership and a new dawn for the famous red and blue. 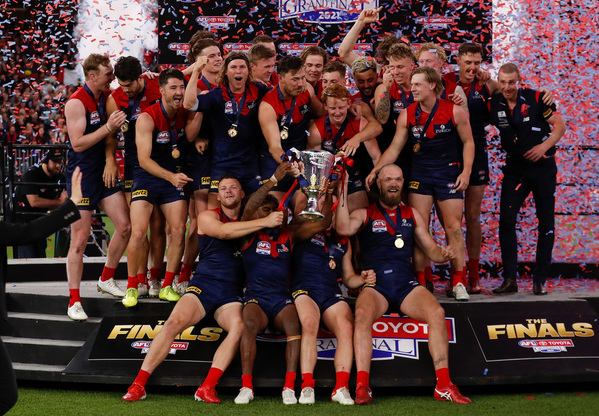 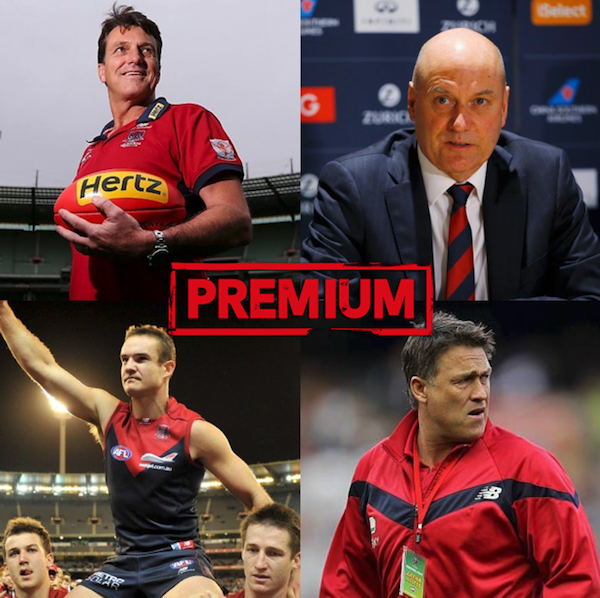